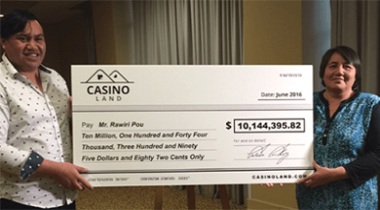 "I still can't believe this is real. I've been in shock since I won and it is literally going to change my life. There is so much my family and I can do with this money and it couldn't have come at a better time. We are so overwhelmed and happy." When asked about how he plans to use his great winnings, Rawiri said, "Right now, the amount is too big to comprehend. But I come from a very close-knit family, so I'd like to spoil my family."

The jackpot is one of the biggest wins for any online casino. A spokesman for Casinoland said, "We're all thrilled for the player, it's a life changing amount of money and we wish him the very best for the future. His huge win has shown that Casinoland has the games and jackpots to deliver record breaking wins and we hope that Rawiri is the first of many Progressive Jackpot winners here at Casinoland."

About Casinoland: Casinoland is a new online casino launched only in 2015. Available in 3 languages; English, Norwegian and Swedish, Casinoland is licensed and regulated by the UK Gambling Commission and Malta Gaming Authority, and powered by Microgaming games.