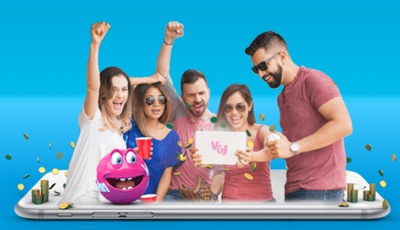 They say that lightning never strikes twice, but try telling that to Torgils when he landed the Mega Jackpot win on Divine Fortune Touch worth €171,956, and then two weeks later to the very day, struck it lucky a second time with a €79,212 win on the same game.

It was a Sunday just like any other in Stockholm, when Torgils picked up his tablet and logged in to his Vera&John account to while away the evening. A long-time fan of the VJ brand, he chose to have a few random spins on Divine Fortune Touch slot game, and minutes later he saw those bonus coins start to drop and found himself face to face with the Jackpot Bonus game!

3 minutes is all it took to hit the Mega Jackpot, landing 5 bonus coins across the reels. We got in touch with Torgils who, as it turns out, was quite laid back about his win. When we asked him if he had anything to say about his windfall, the 75-year old replied in typically understated Swedish fashion, with, "well, it felt pretty good to get a big win."

A no-nonsense kind of guy, when we asked him how much he thought his win would add up to, he just gave a sort of shrug and said, "I didn't really know, I just kept watching it." And the numbers kept going up and up. We're not sure we could be quite as laconic if we'd won €171,956 three minutes after sitting down for a spin or two. There'd probably be a whole lot of jumping up and down, and maybe a little shouting.

And while luck of this magnitude might be a bolt from the blue for most of us, it struck again for Torgils only two weeks later when he landed a second jackpot win of €79,212 on Divine Fortune. Truly the Gods of old Olympus must be smiling down on him. We got in touch again to ask how he felt about this second stroke of luck, and once again he epitomised the "talk is silver, silence is golden," nature of the Swedes. All he said was, "I'm pretty happy."

There you have it. A success story from a man of few words. And whether you're as relaxed as Torgils, or if, like us, you tend to get overwhelmed with excitement, all it takes is a few spins. You could be a winner at Vera&John!